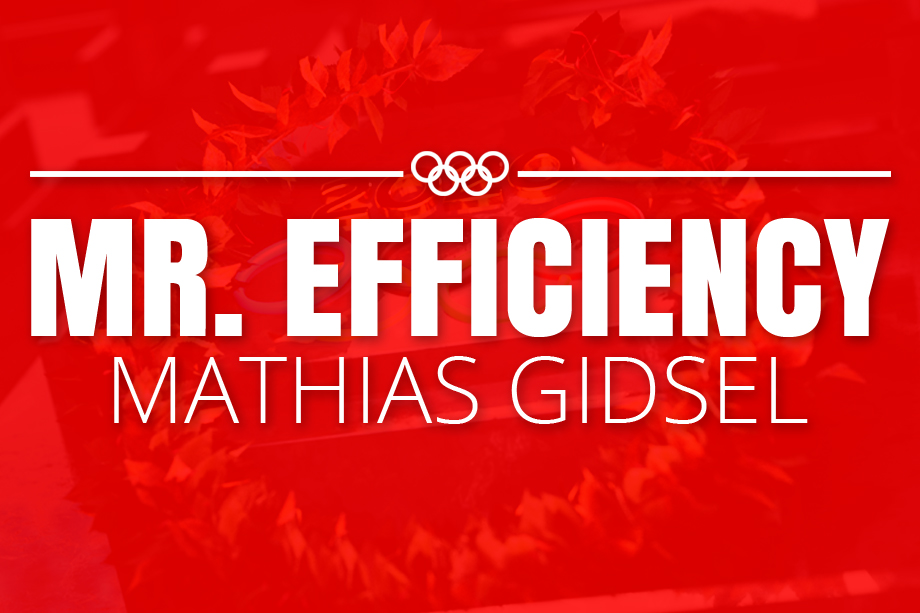 In our podcast Handball in Numbers we didn’t talk about any player during the Olympic Games nearly as much as we did about Mathias Gidsel. And that’s no wonder. After all, the Dane played an outstanding tournament and was voted MVP.

He scored the second most goals in Tokyo, and that was completely without penalty shots. If these are not taken into account, he was even clearly the best scorer of the tournament (5.8 goals per game). He also led the assist ranking with 4.5 per game. And all this just nine months after his debut for the national team.

The most remarkable thing about the 22-year-old Dane, however, is that he has achieved these fabulous figures with an efficiency practically unheard of for a high-volume backcourt player. At the same time, he does not at all correspond to the prevailing ideas for a backcourt player.

In fact, throughout his career, the left-hander has been told that he is too small to be a player at one of the outside backcourt positions with a height of 1.90 m. After all, it is supposedly the main task from these positions to jump up from nine or ten metres and shoot over the defenders.. Even during the World Championship in January, where he was already playing great, „experts“ were talking about his real position being right wing.

Due to his outstanding one-on-one skills, the left-hander manages to get into high-quality shooting positions better than perhaps any other player in the world. His shot quality (expected goals per shot) of 67.3 % is the second best among all backcourt players with at least four games and 2.5 shots per game at the Olympics and 13th among all players. The gaps to the players in front of Gidsel are minimal.

And he uses these high-quality shots 19.9% more efficiently than expected. Among the 12 players with a higher shot quality, only Hugo Descat and Aleix Gomez have better values. However, half of their shots are penalty shots, which are of course very high-quality shots.

To be able to utilise his outstanding one-on-one, it is important that the field is made as wide as possible and that the defence can not just concentrate on Gidsel. It is of course an advantage that Mikkel Hansen plays on the opposite side of the back line.

The playing style of the three-time world handballer is much that of the classic backcourt shooter. 45.3 % of his field shots are from around nine metres. However, his shooting percentage is also significantly worse than Gidsel’s. He hits 46.9% of his shots from the field.

Including seven-metres, Hansen’s shot quality is 61.2 %. Overall, he also hits almost as many shots as expected. Whereby his strong seven-meter rate pulls the overall rate up a bit. In total, Gidsel scored 16 more goals from the field with seven fewer shots than the Danish superstar.

But still, Hansen creates the crucial spaces for his backcourt partner by drawing so much attention to himself. We analysed this (and the entire game in the gold medal) in more detail in our podcast Handball in Numbers with Nicolaj Krickau, coach of Mathias Gidsel at GOG. Among other things, Krickau also talks about how Gidsel and his style of play turned out.

In another edition of our podcast, we spoke with 112-time Icelandic international Einar Örn Jónsson about metrics for player evaluation. These are calculated from various numbers such as goals, assists or turnovers.

Whether PlayerScore, HPI, MEP or BIDEA. According to all these metrics, Mathias Gidsel was clearly the best player of the tournament.

In this context, the comparisons of the All-Star teams according to the respective metrics and the actually chosen are also interesting. Even though the approach of the MVP not being on the tournament’s All-Star team makes little sense, the players were still selected according to these criteria.

It is noticeable, as always, that seven-metre shooters are heavily favoured – except in PlayerScore – and, that rather inefficient play by shooters are favoured if more points are awarded for more difficult shots. After all, every goal and every miss are indeed equally important. And it is just an even higher and more important quality to get „easier“ shots like Mathias Gidsel does on a regular basis. Because this results in significantly more goals.

In the end, however, two things in particular remain to be said: Firstly, Matthias Gidsel is undoubtedly a backcourt player and secondly, his type of player statistically is clearly more promising than the classic shooter.

A close look at Iceland’s success