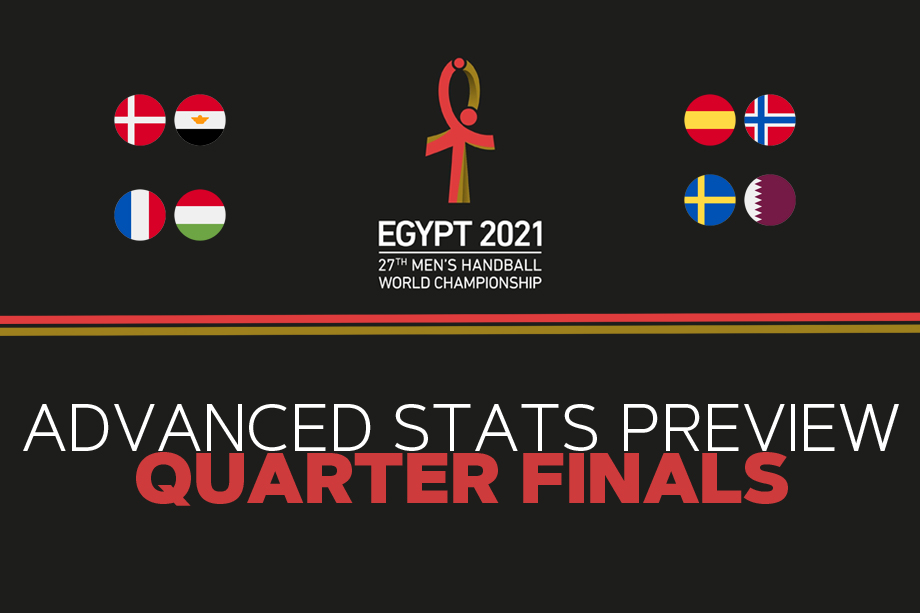 The main round is over, time to look at the Quarter Finals of the Handball World Championship 2021 in Egypt. As a preview, we take a closer look at the numbers of the eight teams still in the tournament. Even though there are still only six games played by each team and the strenght of their opponents differs, the numbers are now reasonably meaningful.

Offensive and Defensive Rating at a glance:

Denmark enters the knockout round as the best team in the World Championship. They are the number one both offensively (33,3 ORTG) and defensively (21,7 DRTG) and therefore of course in Net Rating (11,6). Even though they had probably not the hardest opponents yet, they mastered all tasks without problems.

In offense, they have the fewest turnovers per 50 possessions (6,9) and the best shooting percentage (73,5%). Among all World Cup participants, they take the third fewest shots from the backcourt, generally the most inefficient shot. Instead, they have a high frequency of shots from fastbreaks (which, of course, is favored by the strong defense) as well as from the wings. 85,4% of their shots from this position were goals. Three Denmark’s wingers are amongst the best five players of their position according to the PlayerScore.

Their opponents Egypt, on the other hand, allowed the lowest shooting percentage of all from the wings with only 38,5%. In addition, no other team had such a low percentage of opponent’s shots from this position as the hosts.

Egypt is weaker pretty much everywhere, of course. 30,6 goals per 50 possessions in offense and 24,3 goals conceded per 50 possessions are ok, but just not top figures. However, there is one small factor in defense where they are better than the defending champions. They have caused 0,07 more turnovers per 50 possessions and are one ahead of Denmark first there (rounded both have 12,1).

One area of weakness for the Scandinavians could be seven-meters. Their opponents have the fourth highest percentage (14,1%) and hit it at 95,0%, the second highest of the World Cup. Overall, world handballer Niklas Landin is not quite in form yet, his save percentage is still below 30%. So it’s about time that he delivers an absolute top game again.

The clear favorite is therefore Denmark. But with the home advantage – apparently there are fans that make noise in the arena – an Egyptian victory can’t be completely ruled out.

In defense, Hungary is a little bit better. They concede only 23,1 goals per 50 possessions, France exactly one more. „Les Bleus“ did manage to hold their opponents to a shooting percentage of just 52,8%. That’s the second-lowest figure of the World Cup. Of course, a big part of this was the strong performance of goalkeeper Wesley Pardin, who has the third-highest save percentage of the World Cup, but is out injured.

The number of turnovers by the French opponents is also the second lowest in the competition, at 7,8 per 50 possessions. Here, the Hungarians are much better with 11,5, while in the opponent’s shooting percentage, they are a bit weaker (54.7%).

In terms of playing style, both teams differ significantly. The pace is significantly higher for Hungary, they have over five possessions per game more than the French. Accordingly, their share of fastbreak shots is also higher, from where they have the second highest success rate with 85,7%. In comparison, the Guillaume Gille team has a much higher frequency of shots from the wings, even though the Hungarians have the second-best shooting percentage of all World Cup participants from there.

France is probably the favorite overall, but a surprise from Hungary is anything but out of the question

Probably the most exciting quarter final match-up is the clash between reigning European champions Spain and Wold Cup runners-up Norway. Both have played well so far, but have not been among the absolute top in either offense (28,9 and 29,2 ORTG, respectively) or defense (24,0 and 25,0 DRTG, respectively).

With their strong focus on superstar Sander Sagosen (who is the best player of the tournament according to the PlayerScore), Norway’s backcourt frequency of 28,5% is the third highest at the World Championships. They are shooting better from there than any other team. But still this is their shooting position with the lowest make percentage. The Scandinavians‘ frequency of shots from the actually more efficient six-meters, on the other hand, is lower than that of any other team. Overall, their shooting percentage is only 12th at 64,5%. But they are the team with the third-fewest turnovers (7,4 per 50 possessions).

In contrast to Norway’s style of play, Spain has so far managed to prevent their opponents from shooting from six meters less than any other team. More than half of all shots made by the Iberians‘ opponents come from there. This is their big Achilles heel, which Norway must exploit. The question, however, is whether they can.

So again, based on the numbers, there is no clear favorite and the game is very open. One more factor, however, could be the Norwegians‘ heavy workload. No other quarter final team has the seven players with the most minutes played nearly as much:

In the last quarter final, it is again clear who is the favorite. While the Swedes entered the final round relatively easily, Qatar had to tremble until after their last game. Accordingly, they are much weaker than the Scandinavians in both offense and defense.

Defensively, the Scandinavians are not quite among the top teams either, conceding 24,9 goals per 50 possessions, but Qatar’s 26,9 is even worse than the average of 26,4. Defensively, around the well-playing goalkeeper Andreas Palicka, they allow only a 58,1% opponent shooting percentage. However, they cause only a slightly below-average number of turnovers (9,6 per 50 turnovers).

It’s the other way around for Qatar. They allow their opponents to shoot the ball at 62,7%, which is worse than average. They do force slightly more turnovers (10,9), but they are also the only quarter final team besides Denmark to allow an above-average number of second chance shots.

What is also striking about the two teams is their style of play. Sweden has the lowest pace in the league at 47,3 possessions per game, while Qatar has the third lowest at 49,0. For both teams opponents the frequency of fastbreaks is also very low. However, at least Glenn Solberg’s team likes to look for the fastbreak themselves. Otherwise both teams just rely on a slow build-up of the game.

Even though the Qatari Frankis Carol Marzo is the best scorer of the tournament (8,8 per game, even without penalties), anything else than a victory of Sweden would be a very big surprise.

The shot-stopping stars of the EHF EURO 2022