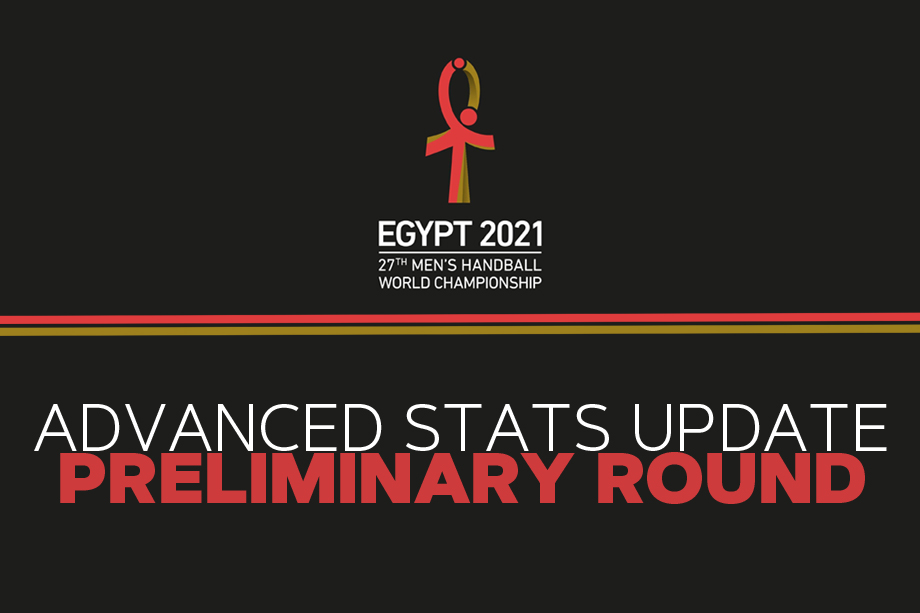 Offensive/Defensive Efficiency, Offensive/Defensive Rating or simply goals (conceded) per 50 possessions is the best metric to evaluate offensive or defensive performances of teams. Why this is the best metric I have explained in German both in this blog and in my column for the Handball-Bundesliga. If you want something in English, I recommend this video (at least the first few minutes). The video is about basketball where these ideas originate from, but it’s pretty much the same for Handball.

The metrics used in this context are as follows:

So, what can we read off these numbers?

Three games are a very small sample size, and I would not recommend anyone to overreact to anything. After a few more games the numbers will tell us much more. But still a few things can be read off the them:

1. Denmark is pretty good but also had a weak group

But they also had one of the weakest preliminary groups. None of their opponents was above average. So, Denmark might be a bit overrated by the numbers.

If we talk about overrated, we have to talk about Germany. According to the numbers they are close to Denmark, but their numbers are heavily inflated by their game against Uruguay, the by far worst team of the tournament. And even that game was offensively not as good as expected. If they had also played against Cape Verde, they would probably be much further down the table and they probably will during the next few games.

3. The worst team of the tournament is in the Main Round

Uruguay is probably the most likeable team of the tournament. Personally, I’m really happy for them that they are in the Main Round. But well, on the other side this means that we will get three more games that are going to be extremely one-sided and not much fun. They are playing the fastest pace of the tournament with 66,0 per game but this is not by design. It’s because their opponents score so easy and fast against them and because they produce the most turnovers.

Defensively, where dedication and passion matter more they are a little bit better. Their Defensive Rating is just the second worst (33,0) behind Chile (33,8). Chile also has a worse opponent’s shooting percentage and France (!) forces less turnovers than the Uruguayans. Maybe they can keep up at least a bit against Brazil.

Portugal went without defeat through the preliminary round. They did that because of their strong defense. Per 50 possessions they concede only 20,1 goals, the third best number in the tournament. Their opponent’s shooting percentage is even the lowest of all teams (45,9 %).

Several favorites such as Croatia, Spain and Norway had some struggles in the preliminary round. By the numbers, all three of them are just slightly above average on both sides of the field. Their Net Ratings are between 2,3 and 3,4. It’s no need for them to panic (yet) but to become World Champion they have to improve. Especially Norway is way to dependent on one player in Sagosen (who is the MVP of the preliminary round according to the PlayerScore).

After the Main Round we will look at the updated numbers. By then they will be much more meaningful. And do not forget to check out the PlayerScore numbers for the World Cup which are daily updated.